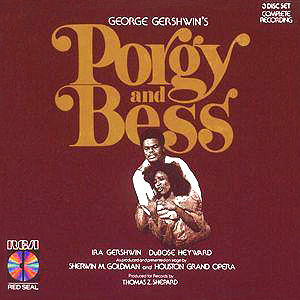 The Greatest American opera of the 20th century.

Gershwin: Porgy and Bess. If I had to pick the project of which I am proudest in my recording history, it would be this complete three-hour recording of Gershwin’s legendary opera. The conductor, John DeMain and the cast of The Houston Grand Opera, headlined by Clamma Dale, come as close to perfection as I am ever likely to hear. I produced this recording making full use of sound effects such as the rolling of the dice in a crap game, the murders of two of the characters, the hurricane, the children scampering across the stage. We used every technique available to bring this piece to theatrical life without the benefits of sets, lighting or costumes. It was recorded in three exhilarating eight-hour days.