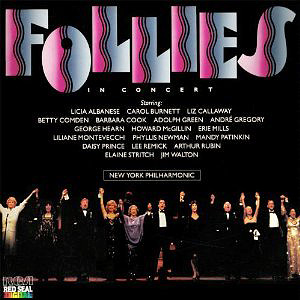 The concert audience in its wild enthusiasm, is a major component of this recording.

The original cast recording of Follies (1971) was highly abridged. My friend and colleague, Ted Chapin, was now heading the Rodgers and Hammerstein office. He had written a book about the original show as it was created day by day in the 1970s. We pondered how to make a fresh recording, and I took this idea to The New York Philharmonic to interest them in staging a live concert of this show. The cast was extraordinary; it included Barbara Cook, Lee Remick, Licia Albanese, Phyllis Newman, Elaine Stritch, Liliane Montevecchi, Carol Burnett, George Hearn, Mandy Patinkin, and others similarly famous. The live concerts in New York were a complete sell-out, and the live recording made of these concerts is wonderful and is still very successful commercially.