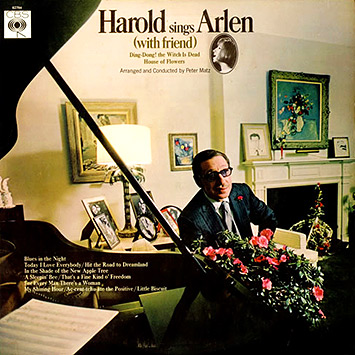 Streisand has hardly ever collaborated with another vocalist, but she adored Arlen and his

Harold Arlen was a musical giant who wrote hundreds of immortal songs, including “Blues in the Night,” “One for My Baby” and all the songs in The Wizard of Oz. On his 65th birthday, he recorded many of his best tunes, and then partnered with the young Barbra Streisand in “Ding Dong the Witch is Dead”.

Unlike most songwriters, Arlen, the son of a Jewish cantor, had a voice good enough to perform the tunes he wrote. Arlen and I spent a lot of time choosing the songs. Picking twelve gems out of a barrelful of hits was an excruciating task. We had chosen 10 and had two slots left, so we decided that it would be a creative stroke to bring in an additional singer. Harold and Barbra Streisand had a mutual admiration. Therefore, it wasn’t hard for me to convince her manager that she ought to participate. She came to the recording studio, in mink coat and jeans, straight from performing a matinee of “Funny Girl,” and participated lovingly with Harold in a duet of “Ding Dong the Witch Is Dead” before doing an exquisite solo in “The House of Flowers.”