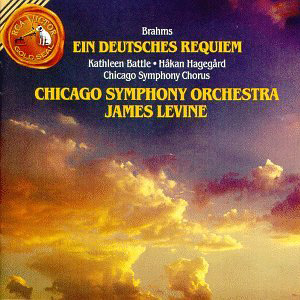 A Requiem of unspeakable beauty and tenderness. Brahms at his most vulnerable and

Brahms: A German Requiem. Getting this recording to happen was a complicated affair. This is the longest piece Brahms ever wrote, and it needs to be performed by a soprano and a baritone of great subtlety and beauty. Add the need for a large chorus and you have a very expensive investment into a project that might never earn it back. First, I had to convince the Chicago Symphony Orchestra to put it on their summer program at the Ravinia Festival, the oldest outdoor festival in the United States, where James Levine was the principal guest conductor. Then I had to assure myself, as vice president of RCA Red Seal and the one who first approved all Classical and Broadway recording projects, that I had enough commercial projects scheduled for release that year to offset the possible failure of this recording to earn back its costs. But I knew that putting together Levine, our two soloists, Haaken Hagagaard and Kathleen Battle, the Chicago Symphony and the Margaret Hillis Choir, was a once-in-a-lifetime opportunity to combine the best musical forces on this planet performing one of the most sublime pieces of music ever written. It was another Grammy winner.